I just sat down to write.

Tangent: thought of a title and storyline earlier today, so noting it.

Ok, now with that out of the way, I can write. This is my pre-writing session, a way to purge all of the detritus littering my brain that keeps me from focusing properly (this may be a very long pre-write, because my brain feels as saturated as an over wet noodle and about as absorbent).

It’s sunny again. So grateful for the wonderful weather we’ve been having. The grey months just wear me down (and everybody else, clearly, because the people that were previously grumpy and long of face are now smiling and kindly again – it makes being a cashier much more pleasant when people’s moods improve).

So let’s start with today.

After working all week at my regular job and three nights in a row at my part time one (Wednesday through Friday), days which begin at around 6:30AM and end at around 11:45PM, (*early*) this morning the cats decided that they were hungry sometime between 5 and 5:30AM – on the one day that is supposed to be my day of rest (theoretically, of course).

Someone (who I now know was Gabriel) awoke and fed the little beasts, but within a half hour they had decided that now that their bellies were sated, they wished to go on a walkabout outside.

The doors are locked, so they then proceeded to (loudly, persistently) meow at our closed bedroom doors (because we assume that with the doors closed, they will leave us alone and opt to snooze until the humans decide to get up – but no), increasing the intensity and decibel levels of their complaints incrementally until someone finally gets up. (This could probably be considered to be a form of torture.)

We didn’t do so in time to avoid the banging that came about some time between 6:30 and 7AM. I came out of my room still sleep dazed, looking for the object responsible for the loud crashing sound – I thought it was my painting and easel in the living room that got toppled, but no – it turned out to be the curtain over the window next to the front door.

Vader, after unsuccessfully trying to open the window that sits over a two story drop from the second floor down to the entryway landing, fell from the ledge and not only knocked down the curtain pole but summarily broke the wooden support piece as he fell, and pulled the thing right out of the wall because he is such a huge beast, even with the weight he’s lost from running around the neighbourhood now that he is allowed to go outside. He is also a goof. If there was a picture in the dictionary next to the word “goof”, it would be his.

So after this last sleep disturbing incident, I picked up the curtain pole, curtain and broken support piece, put them down on the living room couch, and then proceeded back to bed to attempt a few more hours of sleep upon which the meowing at the door resumed, the beasts now pressing their mouths right into the crack under the door, repeating the aforementioned meowing from that position – you know, just to be sure that we hear them more clearly.

I finally threw in the towel around 8:30 and got up. My son’s girlfriend had already left for work and much to my surprise hadn’t opened the door to let the cats out (which is what they were whining about in the first place). I finally liberated them and silence ensued. I debated whether I should lay back down to catch up on the hours of sleep that I’d forfeited throughout the morning or just get up and down enough coffees to feel reanimated… because I have work to do… lots of writing.

And as I write this, I realize that I’ve signed up for one of Hal Croasmun’s hour-long screenwriting talks (this one a study of Forrest Gump, a movie I have long admired and adore) and it is now 14 minutes in, so I’ve summarily missed the boat. Disappointment. I’m considering joining it anyway, even this late into the game.

It turns out the call lasted well over the hour I thought it would be. I jumped in 16 minutes in and still got most of the material. The discussion was about writing a profound screenplay, and what makes a story profound – how to develop the profundity throughout the work by way of intellectual, emotional and action ‘gradients of change’. Interesting and something I might like to explore in more depth but definitely won’t be able to this April. Too much on my plate as it is.

So I’m about ready to sit down to write some more on my story and more than half the day is over. ::sigh:: This is when a time-turner would be a useful implement.

I’m waiting for the kettle to boil. Apparently it was a good time to broom off the back deck, clean off the outside side table, water the plants and give my ceramic Buddha a bath INSTEAD OF WRITING. Also, I clearly need a chai tea in order to get into the proper mood.

Hey… it’s now 3:18 and the chai is still sitting on the counter, waiting for a splash of milk, I’ve reviewed this “morning-ish paper”, corrected grammatical inconsistencies and am now finally contemplating double-clicking on the Word document that the story I want to work on is in and hope to add some more material to today (and submit to my cohort, which was actually due last Tuesday but because they are such an understanding lot, feel compelled to extend to me some slack – because have I mentioned I work too much?).

Between the brooming and the putting the kettle on to boil, I also cleared out most of the sink (loading the dirty dishes into the dishwasher), wiped the counter down, loaded the compost “bucket” (which is actually an old plastic ice-cream container).

The chai is now appropriately milk splashed, but not before I determined that the older milk jug in the fridge was just on the brink of turning; it was emptied, rinsed out twice and a new jug opened. Also, the alternate title for this post came to me just as I was reaching for the second milk jug*.

(*My dyslexia is reaching alarming proportions today too; can’t tell you how many times I spelled jug as “jub”. It’s either fatigue or simply distraction – I feel as flighty as a hummingbird. It could be call of the sunshine; the back door is open and the limbs of the trees in the backyard are nodding in the slight breeze. I think they’re saying “come outside – the weather’s fine!” The sound of Saturday afternoon traffic is steadily streaming into the room as I longingly stare out the French doors.) 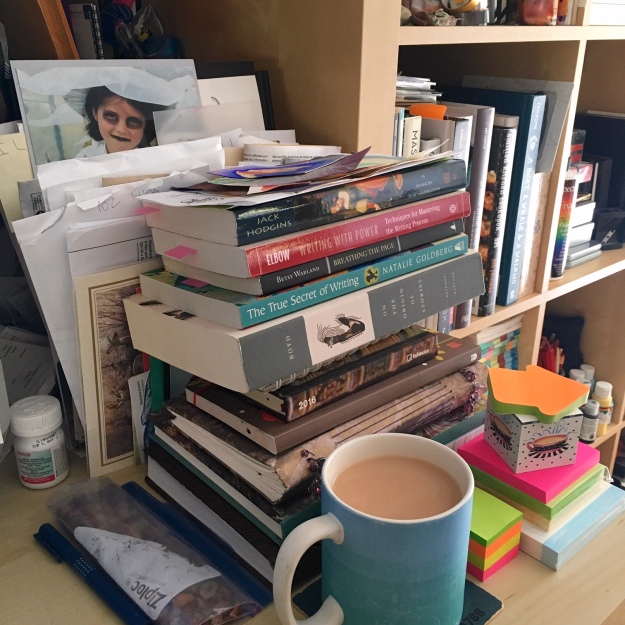 Alright. I’m calling this pre-writing post done. I’m off to stare at a bunch of words on my computer screen and see if anything wants to be written down. Or maybe I’ll go out onto the now immaculately swept deck to have a nap in the shade, with my cooling chai tea next to me.