So much has changed in such little time, in my little insignificant life… and yet here I am, at the cresting of this new year (and also an approaching birthday) and find that the path that I’d been walking on has summarily disappeared… my marriage is dissolving… I have been fired from my (deplorably boring, yet vexing) job… and I am at a crossroads… a place where I can hopefully reinvent my life in such a way as to be pleasing to myself, but also in alignment with the larger-than-myself task I feel I’ve come here to accomplish.

Oftentimes I feel like I’ve squandered precious time, meandering through what seems like endless tangents on my way to some mysterious, inscrutable place, and yet that is the beauty of it, I think. Every moment that I have lived and experienced has only been wasted if I did not take notice of it, and revere it for what it was. Gathering up pieces of myself, and leaving some behind, as I trudge onward in my journey, I can say that each moment has brought me closer to the essence of who I am… the essential me… and whether arms opened to receive me, or by others was pushed away, each has given me a greater understanding of my Self. And for that I am grateful. 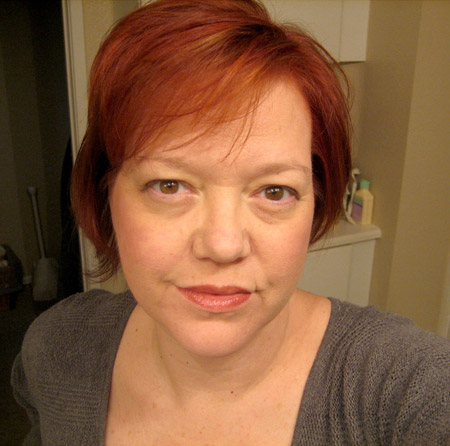 I got my hair done beginning of December… cut and recolored… feels good to take better care of myself, though the jury is still out on the make up… looks great when I do it, but it’s still too much of a pain in the ass to do it with any regularity. 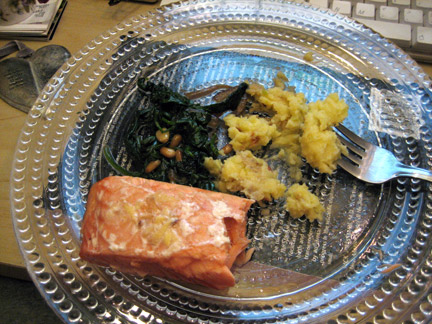 Food… glorious food… I have been fasting/cleansing for months now… I’ve divested myself of some weight, but every once in a while (like at Christmas and again tonight), I go off the wagon and eat and drink things that aren’t allowed… not so much the dinner, which consisted of cedar-wrapped (and oven baked) salmon fillets, garlic and wasabi mashed yukon gold potatoes and wilted garlic-y soy-sauce-y spinach, but definitely the dessert… flourless chocolate cake dolloped with raspberry whipped cream. Okay… so the cake was store-bought, but the rest was prepared by me. Simple dish, really, but really good (and healthy enough). 🙂

I’m ready for 2009… are you? Tomorrow I’m sitting down and figuring out exactly what it is that I want to do next year.

Tonight was the last telecon class of my Kaizen-Muse Creativity Coaching training. What a cool bunch of women I’ve met, all extremely talented in their own right.

I had a breakthrough this week on some concepts I’ve been lugging around with me, that didn’t serve me well. I’ve been in the habit of limiting myself with the use of negative self-talk, one of the many self-sabotaging “tools” if you will, and find that I am not the only one afflicted. In fact, it’s so rampant that I’m amazed any of us get anything done.

I’ve found that I get the most done when I simply ignore limitations (whether real or imagined) and plod through to reach the other side. Worrying about something accomplishes nothing… except perhaps putting off the task at hand for that much longer. Many of us are so busy worrying about how NOT to do something, to wiggle out of a responsibility, that the task would most likely be completed within the time period we spend on avoidance.

While researching “looks” of successful websites/blogs, Jill (Badonsky, the author of Nine Modern Day Muses and a Body Guard, and co-creator of the Kaizen-Muse Creativity Coaching program) suggested we take a look at this site. During my perusal, I came upon this article, which I wanted to share with you, because it strikes a deep chord for me and I suspect (since I am not very different from most creative types) it will in you as well. I especially like the Yoda quote from Star Wars… because that line was like a sucker punch when it came whizzing at me during a recent re-watching of this movie… and it sounded like something my father had said to me… “Don’t try… do!” Makes sense. It is somewhat akin to another quote, this one attributed to Henry Link: Those who hesitate because of the fear of making mistakes are being passed by those who are busy making mistakes and perfecting themselves.

There are many times I’ve asked people to do something, and I’ve received the “I’ll try” reply… which I have found translates into, “Nice try… I don’t think I’ll be trying to do this anytime soon, suckah!” and amounts to absolutely nothing, but they’ve managed to tell you no without really telling you no (thinking they have also avoided to hurt your feelings, when really all they have done is piss you off because they’ve fallen short of your expectations).

Well… I’ve rambled on plenty long on the subject, and will cap this post off with a short “suggested reading” list having to do with NLP (neuro-linguistic programming):

Trance-Formations: Neuro-Linguistic Programming and the Structure of Hypnosis by John Grinder (ISBN 0911226230)

And… happy Chinese new year! Be well and prosper!