Just finished the front/back cover for my first bucket list deco… now just need to do some writing. I sketched the layout and scanned it in, and then dropped and manipulated photos of the various components on Photoshop. Almost ready to finish it up and move on to my next burning project… the Darika collages. More on that later. 🙂

Always a bit slow on the uptake, I’m still working on April pages when the month of May has already begun.

I am again revisiting the “home” theme. I’m not sure why it is such a compelling one to me. I suppose it’s because I have occupied many houses but haven’t felt like I’ve been home in a long while, but rather unanchored, shiftless and somewhat discomfited. I have often wondered about that… what that was all about. Why did I never feel at ease enough to bond with my surroundings or the beings who peopled them?

I think it has much to do with the dynamic of the relationship I’ve been in, in which I’ve never truly felt at ease. It was mutual; or perhaps it was singular, and being sensitive to others’ emotional emanations, I picked up on that and was not able to ease into trust either, knowing that I could not rely on someone who could himself not withstand the vagaries of life. I used to tell my mother that I had married a coward.

Certainly, he has a sense of self-preservation, but he has no sense of community, and during my most difficult and trying times in these sixteen years that have come and gone, I have been left to my own devices to cope; been told to ‘fix’ myself where I was broken, and if I could not achieve this on my own, to go get the appropriate help. Never was there a sense that perhaps he was in need of some fixing himself, and that perhaps he might perceive that part of the problem that festered between us was of his own doing. Never was there a sense that, when the going got tough, that for the lack of knowing what else to do that he would do nothing more than simply listen and just be present. But… this doesn’t matter now, because it shall soon no longer be of consequence, and if I’ve grown as a result of this pairing of spirits, then it will have served its purpose, regardless of the outcome.

Perhaps this obsessive refocusing on the “home” theme is that I am returning, after so many years of being abroad, to a place that is equally strange to me now as my initial trek to California was almost two decades ago… home, indeed.

So I embark on this next journey with an open heart… with a heart that will embrace all that it encounters with a sense of hope and wonder. Perhaps this time I will truly have found my way home.

Another slow dive into self. Every time I think I’ve embraced my darkness and am ready to re-emerge into light, I go deeper still into the murk. It’s not pretty here. It’s lonely. Frightening, sometimes, but no matter how hard I try to turn away from peering at myself a little more closely, I look again, awestruck, sort of like when you drive by a traffic accident and your head swivels of its own volition. Is there any blood? Any deceased? Curiosity tinged with apprehension, as the eyes survey the scene to take it in… but hurry! You don’t want to hold up the traffic; we’ve been waiting long enough already, stuck in this traffic jam of life.

I envy the “whimsy” art girls. They remind me of the popular girls in high school, dressed in Lacoste shirts with upturned collars, hair flipping just right, Farah Fawcett-like, banding together in their dimpled butter cream frosted cheer. I tried then, to be part of the crowd, but I never did pull it off. I didn’t fit in anywhere, really. Defiantly, I just stopped trying, instead embracing my deviance. But I’m quiet so who could tell? It was a silent revolution.

Why can’t I go there, to the bright and cheery part of the garden, where all is light and airy? I coo with the rest of them at the pinks and oranges, the gingham and flowers, the ribbons and ruffles and swirly things. I just can’t make them. When I try, they look like I tried too hard, and I never quite succeed in getting ‘there’ wherever ‘there’ may be.

That stuff seems like foreign artifacts from another civilization that I just can’t grasp. Like the natives in South America that were surprised to have men from a Spanish armada show up on the beach when the vessel that they traveled in to get there was bobbing offshore in plain sight, but their minds didn’t recognize it as a boat and dismissed it outright, seeing nothing but smooth ocean. They thought these men were gods instead of their impending oppressors. Amazing, the brain… isn’t it?

To me, color has meaning in a visceral sense. It slugs me in the belly, like Alex did, when I was four; he was trying to be a bully and succeeded, since he was already in grade school and whooooshed the wind right out of me. I got to slug him back, in his big fat jelly belly, because our parents ‘talked’ and it was deemed appropriate punishment. Betchya he wasn’t so happy to be slugged in his belly by a little four year old girl, intent on inflicting pain in kind. Call it instant karma. Wind for wind.

Color rattles through me like the wind and carries on conversations with my hands, with or without my intervention. Sometimes, like Stella in A Streetcar Named Desire, I can see colors when I close my eyes; sensations translated into streams of light, swirling through me like vortices. There is a word for it, though I can’t remember what it is. There is a word for everything.

I’ve been working on my January chapbook pages the last couple of days. The 21st of January marked yet another anniversary of my birth. I chose to be inspired by Aerosmith’s lyrics for “Dream On”… and then composed a bit of my own schtuff for the journaling portion…

time… my own little stream of all that I am,

it flows throughout this waking dream

like stars clustered, spilling brilliant in the milky way–

things I remember and more I have yet to vision

equally nascent from this vantage point of now–

this moment, teetered on the was and yet to be

but for a glance in either direction,

solidifying, shifting to become something

I stand at a pivotal point in my life. Starting over… new beginnings, or endings… or perhaps both, really… in soul and work and heart and hearth. It seems everything is being bucked up into the air like dirt when the wild boar roots around for truffles. Maybe I’ll find some truffles. Maybe not. I’m ready for anything… everything and nothing. Certainly something. Whatever is in this wake of upheaval, I hope it is gentle with me. I could use a little tenderness.

Some days I am more hopeful than others. Some days just leave me bereft.

Month two of an on-going collaboration. My inspiration for this month was a musical piece by Delerium, featuring the singer Rani:

I’ve fallen from a distant star,
Came back, compelled because I love.
I’m caught between two different worlds,
I long for one more night of love.

I’ve fallen from a distant star,
Came back, compelled because I love.
I’m caught between two different worlds,
I long for one more night of love. 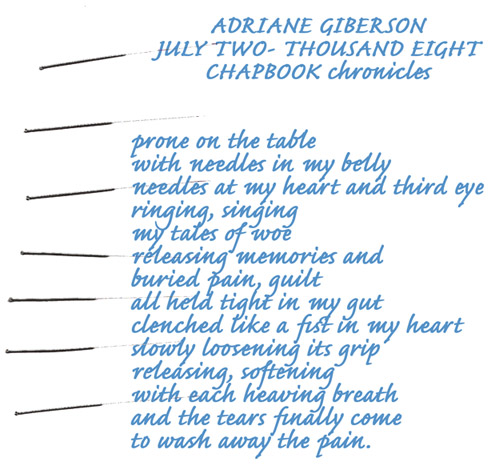 #Lunch
If you haven’t read @jacobnordby ‘s THE CREATIVE CURE, it’s available on Kindle for $0.99 (US) / $1.30 (tax incl. CDN).
When writing stalls, I lean on my visual art skills.
Decisions, decisions.
Had such a wonderful day with an old friend today, a friendship that began in 2003 in Irvine, CA and has tracked across the border. So glad we had a chance to catch up, and we won’t be so busy that another 8 years elapse between visits!
Experimentations with @drphmartins concentrated watercolours this morning, with additions of titanium white gouache, a few details added in colour pencil.