There’s a story happening on my window sill this morning. The spider, the fruit fly and the cat who’s over the moon. With joy. To be sitting outside. Or close to me.

I am often in front of the sink, which faces the window. I’m in the kitchen now, making breakfast. Pour over coffee with lactose free whole milk, two cubes of raw sugar and two slices of bread, toasted and buttered. Not the best of menus, but simple and sufficient.

The butter was hard as rock when I pulled it from the fridge, so I cut a little corner of it off and tucked it into the microwave for a few seconds. The temperature has cooled off so much now that butter can safely be stored in the cupboard again without becoming a melted puddle. 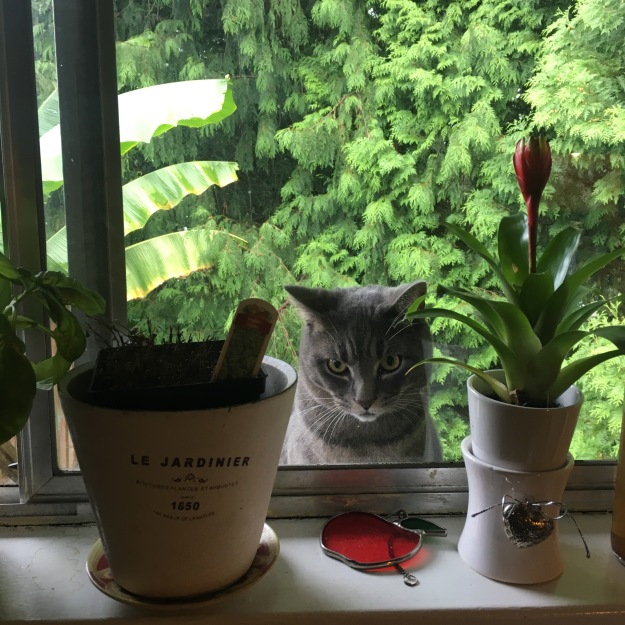 I moved to the living room, ate the toast as I sat on the couch. The cat was meowing at the window, “Where are you?”

When I finished eating, I brought my plate into the kitchen and told her, “I’m here; come inside” but it took a few moments for her to decide to join me. I downed some ibuprofen for my shoulder pain. The physio session at noon yesterday (as it has for the last five Fridays) always sets me back a bit in regard to the shoulder pain. Everything feels like it’s raw and on fire, stiff and resentful.

I sat down again in the living room to take my coffee when she eventually lumbered over. She speaks to me in meows, certain that I understand. Maybe I do, now that I think of it. She seems to understand me too.

After kneading and walking across my legs a few times, she finally settled herself down half on the couch, half on my lap, rapt and purring for as long as I rubbed her behind the ears, under the chin.

After a while she left me to go back outside, and I decided that the call of the comfort of my warm bed outweighed the comfort of typing these words out on a keyboard rather than on my smart phone, so my thumbs are doing the hard work this morning.

Plans for today are largely to rest. I am so beyond tired at the moment that I feel a week off (well, nine consecutive days, actually) will barely scratch the surface of my fatigue, but I’m hopeful.

I want to rest but also do some planning, make lists of the things that I want to do so that I can slot them in, so that they get done. Time is so easily frittered away if not paid attention to.

The rain will surely help with getting me to complete the inside tasks simply based on the fact that it isn’t appealing to be outdoors. One of these days I’ll have to invest in a proper neoprene raincoat, pants and some waterproof shoes. Nothing I dislike more than getting my feet soaked, having them be cold and damp. Now that I don’t wear glasses, I don’t mind my face getting wet, and my hair as a fashion statement has been long abandoned.

There is a muscle twitching in my left quadricep. I worked out on Tuesday but that was days ago, so why the twitch now? The mysteries of this body has me in a constant state of both wonder and alarm. What next?

I’ve been invited to a housewarming party later today and I am not sure I will muster the energy to go. I want to vacuum and wash my sheets and bedding (yes, and rest too). And one can’t verily show up empty handed can one, and things are tight this week, especially if I want to do something more than just lay about the house. A social life is sometimes beyond my budget.

And I have loads of books I want to read. And to write, too. My writing habit, established at both financial and personal cost during my year-long writing program, is in a state of atrophy at the moment. I can rationalize many good reasons for not keeping it up, even for a short time, but in the end it’s my heart’s desire that suffers; the passions that set me apart from others whose calls go unanswered. An unrequited love, like the many others that life has pinned to me in some form or other.

So much to do, so little time, and such little order in my life. And ease. Not much in the way of ease, either. Working more provides a bit of financial slack but the lack of time leaves me unrested, or constantly trying to balance fatigue and overwork… hard to fit creativity into there, especially since writing takes so much energy.

Well, not all writing. Not this kind of writing. This is like a one-sided conversation; I can pretend to have an engaged and interested audience, even if there isn’t one. I’m good at suspending disbelief… just ask the cat; she listens to lengthy conversations, saves me from being the nutty one who walks around an otherwise empty kitchen and talks to herself.

Alright… time to rouse myself and brew a second cup of coffee. I can’t be deemed fully human or capable until the second cup is being consumed.

It’s just that kind of day.
Sometimes inspiration comes in the form of reading.
Morning light.
May it grow and flow #2022
Because clearly more baking had to be done.
And the baking continues.