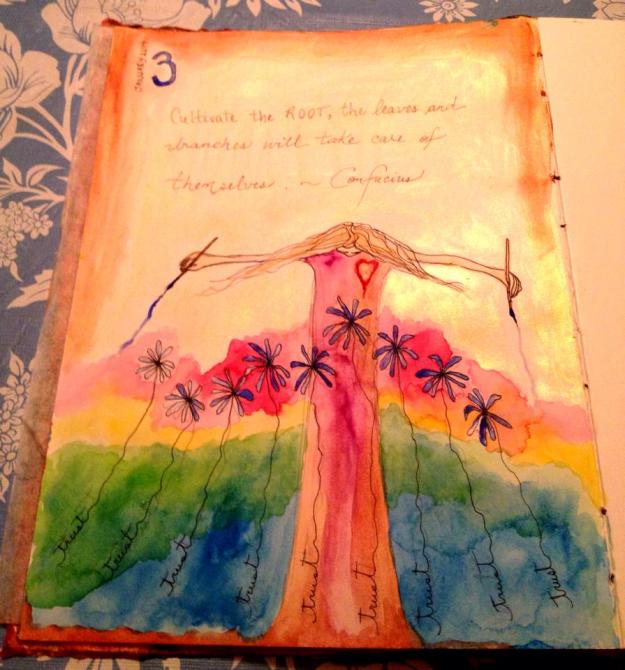 (pencil undersketch penned over and painted with tube gouache. #30DayJournalProject)

Slow. Rain. Comfort. Coffee. Dream fragments. Hunger pangs. Hair and clothes that need washing. Lists made. Things to be done. All folding into this space and time of semi-wakefulness. This moment. WHAT do I want? What do I want to DO? Besides sleep some more. Oh sleep, how I love thee. It took months before I broke out of the cycle of awakening early every morning, filled with anxiety as though I’d missed the alarm. My rhythms are different now… back to what they naturally are inclined to do – late nights and not wakening until it’s light, which on these shortened winter days is late. Ah, yes… light. Not much of it again, these days. I think that I ought to go for a run and try fitness again but all I want to do is sleep. Keep warm and cozy and dry. Definitely not wet. Why do people like running in the cold rain?

It’s almost 10am and I am only just dragging myself up and about.  It’s grey outside and the grumbling in my stomach reminds me to put the kettle on. Coffee first. Then, when there are enough neurons firing, something else… food. Yogourt and granola. Love this granola but seriously – $8 for the bag made me cringe, but I got it anyway because it has Good Stuff in it, and I don’t have much Good Stuff so I need to make it count. I have a sort of dietic apathy.  I love food but the preparing and cooking of it doesn’t interest me, so quick and convenient (which usually doesn’t mean healthy). I did buy some pita bread and will experiment with making my own chips (*must steep fresh rosemary in olive oil*). I do like the experimental aspect of it. And when people enjoy what I make. There’s only the two of us and it gets old always being the one to be doing the cooking.

*pausing to make some coffee*

The smell of coffee is still on my hands. I love how it smells. How it tastes, too, but the smell is what brings it all together – the scent, the taste, the way it’s warmth spreads as it progresses down to my belly.

I had an image come to me this morning, for my art journal page, as I laid in bed with my arms clasped together over my lower abdomen, feeling it rise and fall with each breath. The awareness of my breath made me focus on it even more, and I breathed relaxation into it. I saw it as if it was burning, like a fire enlivened by the wind from the bellows. I had until now thought that my creativity stemmed from the root chakra, the elemental connection of our bodily selves to the spark that materialized us, but I see now that it’s at the second chakra where my breath is feeding the raging fires that it births from.

I made plans. I wrote them out (in my Notes, on the iPhone).

One is to do these… morning pages. To write for an hour. Another is to write on one of my stories. I haven’t touched the Telescope story in a while, and I feel it’s time to revisit it again. I’m just going to write. What else can I do but write it out? Yet another to-do item is to research freelance opportunities for writers and artists. I want to know where the markets are, what they require, so that I can build a repertoire of material that will likely be attractive. Targeted work. I always thought that making “art” to order would take away from my creative process, but I think in some ways it will fuel it, make me stretch in ways I would not have had it just been for me and my being left to my own devices. I hope it makes me a better writer and artist.

And then there is the roast for dinner. I am going to put it in the oven around 4PM. It’s a mammoth rolled pork blade roast, and I now realize that I will have to return to the grocery store because I think it needs to be accompanied by brussels sprouts. Yes, definitely. It will be poked and inserted with slivers of garlic and resemble Pinhead – Clive would be proud. I wish I had some rendered fat to rub on its surface. I have some duck fat and it works well as a fat for many things but it just doesn’t sound like it would taste right with the pork, which is lighter and more subtle in flavour and the duck fat doesn’t ever quite lose that wildness. I wish I could find some juniper berries. Not tons.. just a bit. I had a recipe call for some and it’s not something that regularly shows up between the peppercorn and nutmeg and turmeric.  I have a serious spice hoarding issue. Well… not hoarding – collecting. But I use them. I’m the one who makes lavender and thyme shortbread cookies. I love lavender. In food. Well, in anything, Period.

Nothing particularly exciting, though Organic Gardening was in there, and I know that preparing for the next growing season isn’t all that far off. I’m so grateful that Tyler and Amanda are keen gardeners and that they allow me to stick my hands into the dirt here, and also reap some of the bounty. I’ve been thinking that perhaps my (two boxes of!) paper making supplies could be put to use during this lull and that I make some seeded paper to sell. On etsy, maybe. I always wonder about whether it’s worth opening up an etsy storefront or not. Whether it’s more trouble than it’s worth; whether you need the demand already in place for the supply to be worth the trouble. Not quite buying the “if you build it they will come” paradigm. But who knows.

Well, the hour is about up. I’m ready for some granola and yogourt. Maybe another coffee, and then I’ll tackle something else on my list. One of which should be to take a shower.