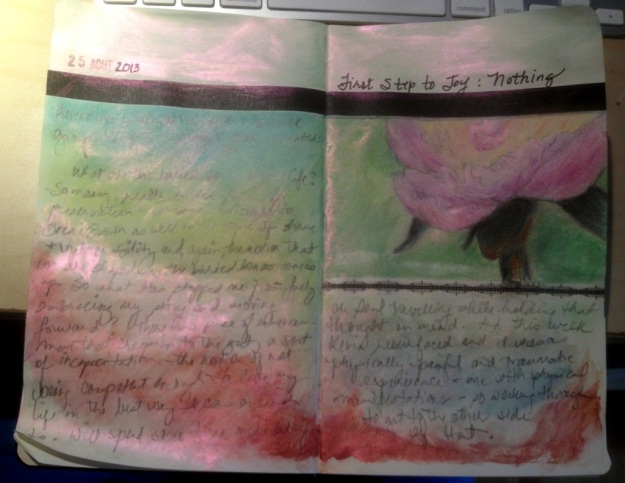 The title prompt is what Martha Beck suggests as the first of ten daily practices for a happier life (as outlined in The Joy Diet). I have been doing a whole lot of nothing for a while now, and feeling guilty about the lack of productivity. I do “guilt” well.

The truth of the matter is, I haven’t drawn or pulled out my art supplies for quite some time. I think it has to do with the emotional/head space I must be in to create – I must be quiet and still to hear where the medium wishes to take me, or to write out what my internal dialog is saying, neither of which seems to be my natural (or indeed self-induced) state lately. Frenetic, maybe. Despondent, maybe. Hugely dissatisfied, maybe. Listless, maybe. But definitely not quiet nor still. Certainly not both at the same time.

Lately I have been embarrassed by my inner dialog, as it touches on things that I haven’t wanted to consciously address, contenting myself with acknowledging that things were not right and good yet not yet prepared to attend to righting them. Somehow those things have a way of catching up to you, and if you don’t make the choices that very obviously need to be made, the universe urges them along on your behalf. More than once in the recent months I have asked It to be gentle with me; to bring change but in a gentle and less painful manner than in the past.

Hence the unexpected (though perhaps largely overdue) boot out of our old place into a new one (which, though more costly, is also a much better space in more ways than I can enumerate – feeling extreme gratitude for this) and a small claims court notice that arrived this week from someone who I had buried deep within myself in an attempt to heal myself from the sharpness of what transpired between us, much like an oyster does with the grain of sand that eventually becomes a pearl.

Unfortunately his patience with my process was not as generous as my own need for it was, and so I am having to look at finding a resolution to something I had not yet been prepared to address.

Such is life, and here I am, examining the wound and finding a way to heal myself of its cause. While I understand that the wounding and how I chose to participate was of my own doing, I also feel that acknowledging that another person’s actions did not have my best interests at heart even while holding their own interest out for my consideration. While what occurred was done with my consent, it was still inconsistent with right and honourable action, even within his own paradigm. My lesson here is in my choosing and accepting terms which did not sit well with my deepest self, the resulting fallout being a feeling of self-betrayal – so not once but twice betrayed.

This is one story of many other stories which have collectively shaped who I am today, and many more will come before the last and final story comes. I know I am not alone in the making of poor choices, and while they are uncomfortable and make us squirm they also sharpen and hone who we become (for the better) once all is said and done. If nothing else, they certainly provide much in the way of creative fodder for my written endeavours.

All this also happens to coincide with my taking part in a group reading (rereading, in my case) of Clarissa Pinkola Estes’ Women Who Run With The Wolves, which is facilitating this self-examination in what will hopefully be a gentle and supportive manner. After listening to Brené Brown’s The Power of Vulnerability this weekend, I realize that I am not alone in my struggles; that what I wish for most from those I reach out to during my most difficult moments is empathy vs. sympathy and that should the same be expected of me, that I am wise enough to extend the same in kind.