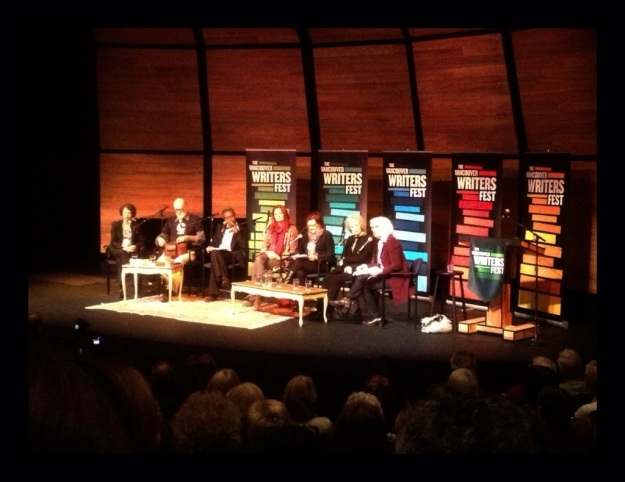 Well… I almost missed my date with greatness. My alarm was set to ring early; I awoke with a start at 8:40 (late, late, late) realizing that I hadn’t reset the alarm to ring on a weekend day. So alarmed, I threw clothes on and ran out the door. Traffic cooperated and I made it into town in record time (I had intended to take transit – oh well).

I met Colleen near the office and we drove to Granville Island with enough time to spare for an inhaled cup of some JJ Bean dark roast and a chocolate almond croissant from L’Échalotte et al. Breakfast of champions (you know… sumo wrestlers).

Hundreds of people are packed into the theatre, many no doubt like me waiting to be in awe by the grande dame of Canadian literature. Peggy (as she is many times addressed by her writing peers during the panel but whom most of the world knows as Margaret) is to Canadian literature (or literature in general) what Judi Dench is to the theatre. Resplendent. And incredibly funny.

All of the panel participants are wonderful and provide great Insight both into the historical aspect of Canadian literature throughout the latter half of the twentieth century and into this one. Savvy. Something I am (perhaps obstinately) not. The arts are a fickle realm to operate in – we all wish to indulge the creative genie living in each of us but we are seldom able to make a living doing only that (because, as was mentioned during the discussions, there is a popular notion that the results of our endeavours should be free because why should people pay for something that we had so much fun in creating?).

At the end of the panel they pulled a name out of a hat – let me correct that to Margaret Atwood pulled Colleen’s name out of a hat… a brilliant stroke of luck since their original method for awarding the prize (which was from the publishing house Anansi and included a gorgeous black leather bag stuffed full of their ten newly released A-List titles, and an A-List Roots t-shirt) was a bust when they realized many people had chucked their feedback forms into the recycle bin – we never even got one. Since Colleen purchased both of our tickets she had the grace to share some of the spoils, and I’m looking forward to reading (for the first time, I’m ashamed to admit) Graeme Gibson’s Five Legs. 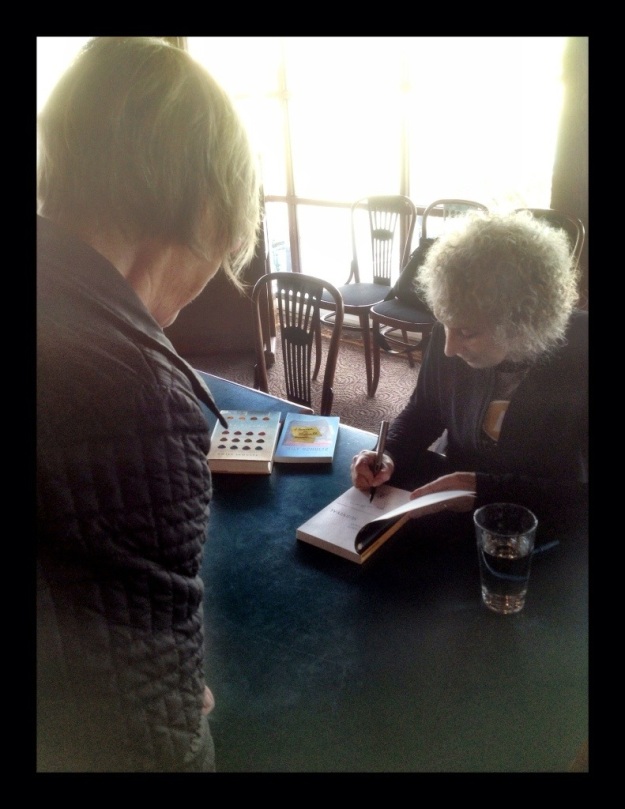 Recently (at one of the north by northwest studio 2 book club recordings I attended), one of the audience members asked the eternal question of the unpublished wannabe published author: what do I need to do to be published? In response one expects to receive concise directions (a formula, really) and names (preferably with a “hey, I’ll hook you up”). I remember because I was that person, asking that question (and hoping for that response) some time ago. Until I had an ah-ha moment. I’m still unpublished but I realize now that that is the wrong question. It’s not about the deal or the money or the contact name – it’s about writing and the craft of writing, loving to do it so much that the process is in itself the reward, and because not doing it would break your heart and leave you somehow incomplete. Not that writing things like Twilight or 50 Shades of Gray don’t bring huge monetary reward (though they are flukes of the highest kind) but because the kinds of things I wish to write I wish them to crawl under your skin and settle into your heart and psyche, and maybe, just maybe, you will want to read them again. And I still have so much to learn on how to achieve that, but at least I am now asking the right questions.

Follow The Artsy Fartsy Chick on WordPress.com
Join 786 other followers